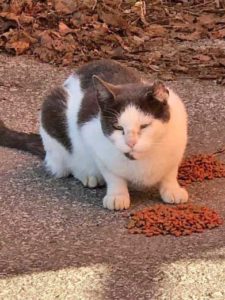 Our 16,000 sq. ft. facility is in a fairly anonymous inner-Kansas City business park named after a small, but pivotal Civil War Battle; called the Battle of Byram’s Ford which occurred 154 years ago in 1864. In fact, when our building was built, they found cannon balls still in the ground during excavation. Behind our property is the Little Blue River and a lot of green space that is home to some wildlife… including a lot of mice. Or so we’ve heard…

You see, we don’t have the mice problem our neighbors talk about. We don’t because we have Buddy. Buddy is the white and grey cat in the picture. And Buddy has lots of other buddies too. Being a feral cat isn’t an easy life. Most don’t live past 4-5 years, and as you can see, Buddy has had a couple of tussles himself.

We supplement Buddy’s “live” food with cat food as you see in the picture. In return, Buddy and his cat colony keep our building “mouse-free” year-round. It’s been a great partnership, and a win-win deal for both sides. 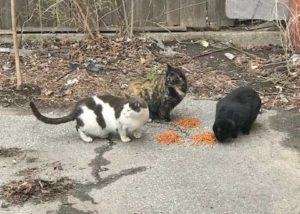 We entered into a partnership of sorts with Buddy. We want him to stay around our building as long as he brings his friends along. And the reason is simple. It’s important to spay and neuter feral cats (and dogs). Left alone, they will multiply quickly with a high mortality rate. When we first moved into our building, there were about 20 cats roaming around. We love animals and one of the ways to treat them humanely is to help control the population.

One of our favorite organizations is Spay Neuter Kansas City, who agreed to live trap all of Buddy’s friends, spay or neuter them, give them their shots, and then release them. Buddy didn’t participate in this part however, as he was too smart to fall for that Can of Tuna in the traps. We support SNKC annually because we believe in their mission and the good work they are doing for animals in Kansas City.

These Feral Cats Aren’t Put Down, They are Put to Work, on USA Today

To Solve a Rat Problem, Send in the Feral Cats, on Chicago Business

Project Porcupine Roller: Coating spec says we can’t be off by even a “...
Scroll to top